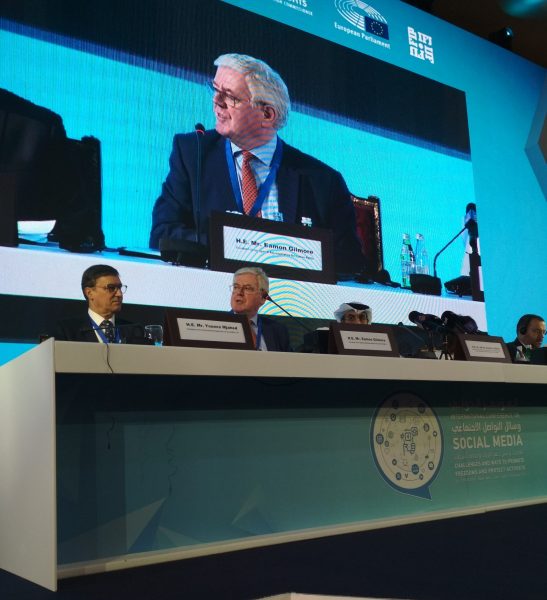 It is a great honour to speak on behalf of the European Union at the opening of this very important and timely international conference here in Doha, with representatives of governments, international agencies, civil society, journalists and experts. Mine will not be the only EU voice you will hear over the two days. You will hear also from Gilles de Kerchove, the EU counter-terrorism co-ordinator; from members of the European Parliament who are co-sponsoring this event; and from former Commissioner Dimitris Avramopolous. And I want to acknowledge here the Head of the EU Delegation accredited in Qatar, the Ambassador Cristian Tudor, as well as the representatives of several Member States. But first I want to thank the main organizer of this event, the National Human Rights Committee of Qatar, for the invitation to address this opening plenary.

This Conference on Social Media – on the challenges and ways to promote freedoms and to protect activists – could not be more timely and more relevant. The interplay between social media and human rights, which this conference will examine, is a complex and sometimes delicate relationship. Social media is relatively new, but is already an everyday part of our digital age lives, and it will play an increasing role in the way we live our lives, and in the ways we interact and relate to each other into the future. There is no turning back from social media, no avoiding it, and ultimately no way of censoring and controlling it, as was often the case with the broadcasting and print media with which we had already been familiar.

Like all major changes in technology and communications, it takes us humans a little time to adapt. In the case of social media we have had very little time. Facebook is with us for only sixteen years; Twitter for only fourteen, and the iPhone for a little more than twelve. And it already feels like they have been part of our lives forever. Like all things new, there is an element of apprehension about the disturbance caused and about to be caused to our already familiar ways. And this Conference will of course address those challenges.

But, especially in the context of human rights, we should also recognize and explore the enormous potential for good which social media has brought for us. Let me give you an example. Just two months ago, I attended in the European Parliament for the presentation of the Sakharov Award – the European Parliament’s major award for human rights. This year it went to Ilham Tohti, who has been imprisoned in China for several years. But one of the runners for the award, whom I had the honour of meeting afterwards, was a group of young girls from Kenya who have developed an app to help their friends, and to help other girls and women to avoid and to combat female genital mutilation.

And I saw further examples of how social media can be used to expand the space for human rights, through the collection and releasing of evidence about human rights violations and of violations of international humanitarian law. What might once have taken official reporters months to assemble, can now be snapped by an iPhone and instantly reported through social media.

The theme of this conference is one of which the EU has been giving attention for some time. Our starting point is that the European Union is a union of values. Human rights are in our DNA and inform our global action. Be it in trade, in security, or in development. The right to freedom of expression, freedom of the media and media pluralism are enshrined in the Charter of Fundamental Rights of the European Union. Freedom of expression underpins our vibrant societies, nurture dialogue, promote the free exchange of information, and enables a number of other human rights.

It was the aspiration to freedom and democracy that made the Berlin Wall crumble and put an end to decades-long division between the East and the West of Europe. And in 1989, when the artificial Cold War division melted away, social media were yet to be born. Today, they are a reality that has profoundly changed how we exercise the free speech, how we access and impart information. Journalism has been dramatically changed by social media. An engaged citizen, a protestor, a human rights defender, they can all become journalists in their own right. Social media have a great potential for the enjoyment of human rights. They encourage us to enjoy fully a wide range of human rights – freedom of expression; freedom of assembly and association; they empower us when seeking and imparting information.

Yet, the question arises: Do we have more freedom of expression today than before the rise of social media? While social media has opened up new avenues, new threats have emerged too – disinformation campaigns, Internet shutdowns, proliferation of hate speech, surveillance, and unprecedented breaches of the right to privacy among others. Freedom of expression and the old scourges of censorship, hate speech and propaganda may have acquired new forms in the digital age but the conundrum remains the same as it used to be in the offline era: How can we ensure an enabling space for the media and media independence? How can we best tackle propaganda and disinformation? How can we tackle the plague of hate speech? How can we protect those exercising freedom of expression, be it offline or online? What more can we do to hold accountable all those who violate and abuse this freedom?   What can we do in practice to keep open the online civic space?

The European Union and its Member States have been developing a toolbox to tackle these challenges at the global level. Let me offer you a snapshot of what we do. Our Guidelines on Freedom of Expression (adopted in May 2014) provide the political and operational framework for our external action in third countries and at multilateral fora. The guidelines, for example, set out our policies advocating for the release of journalists, media workers, bloggers and others detained for the expression of their views online and offline. They define our policies of observing trials of journalists and citizens using social media to express their opinion.

An overarching human rights policy document, the EU Action Plan for Democracy and Human Rights, is currently being prepared for the next five-year period. Aware of the realities of the digital age, it will also address the changing media ecosystem. It will address new challenges brought about by the wide use of digital technologies such as disinformation, data security, and privacy issues.

The European Instrument for Democracy and Human Rights is our key financial instrument promoting human rights worldwide with a budget of about 1.3 billion euros for the period of 2014 to 2020. Last year alone, the EU launched projects in support of freedom of expression in some 30 countries amounting to about 24 million euros. Among other areas, the instrument supports “civic activism and participation by leveraging digital technologies” and examples of projects were: in Brazil, to ensure that uses of robots in social media to promote disinformation are faced with transparency and media literacy practices; in Cambodia, to empower young ethnic minority community citizens to make government more participatory, transparent, responsive and accountable, including by leveraging digital technologies; and in Central Asia, to incentivise vulnerable youth in remote areas to participate in online and mobile educational games that build their critical thinking and to expand access to online information and educational tools. The instrument also includes an emergency funding facility for human rights defenders, including journalists and bloggers, at risk.

The European Union has also taken forceful measures to strengthen its capabilities to detect, analyse and expose disinformation attempts, including foreign interference in election processes. In 2018, we have adopted an Action Plan against Disinformation. Amongst other measures, this action plan established a dedicated Rapid Alert System to facilitate the sharing of data and assessments of disinformation campaigns and to provide alerts on disinformation threats in real time between European Union institutions and our Member States. Further, the East Strategic Communication Task Force of the European External Action Service is a decisive response to disinformation threats from and in our Eastern neighbourhood. Since it was established, the East Strategic Communication Task Force has catalogued, analysed and put the spotlight on several thousand examples of disinformation. But we know we have to do more. Statistics show that on average two journalists are killed every week and almost every day, a journalist, a media worker or a citizen journalist is incarcerated (Reports without Borders statistics).

Ladies and gentlemen, delighted to share with you, I am looking forward to hear many inspiring stories at this conference and throughout my visit to Qatar. I am looking forward to learn about numerous examples of good practice of employing social media and digital technologies for better enjoyment of human rights. Stories and practice that can be and will be replicated worldwide. For our societies cannot thrive without citizens expressing freely and without fear their opinion, freely accessing and imparting information – no matter if offline or online through social media.

Further details on the conference can be found here.