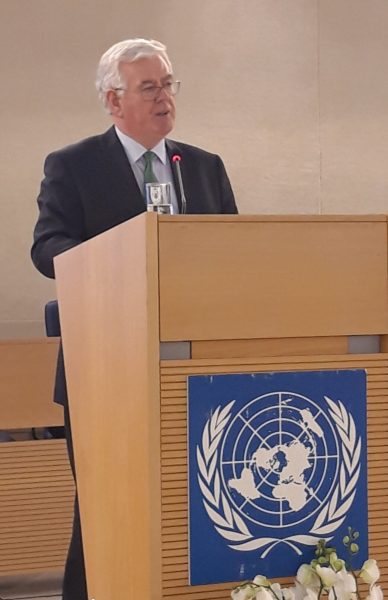 As we mark the 75th anniversary of the entry into force of the UN Charter, the European Union reaffirms its staunch support for the rules-based international order and effective multilateralism. The EU will continue to promote complementarity with the UN, continue to invest in a strong and effective UN system, and support the reforms put forward by the UN Secretary General.

We welcome and fully support UNSG Guterres’ new Call to Action on human rights “to help societies grow in freedom, to ensure equality for women and girls, to advance sustainable development, to prevent conflict, reduce human suffering and to build a just and equitable world”. We welcome the call to re-emphasise the universality and centrality of human rights. We support the call to mainstream human rights throughout the work of the UN. The promotion and protection of human rights and the rule of law is at the heart of EU external action and remains at the core of the EU’s partnership with the UN. Our common engagement for a more peaceful, cooperative, equitable and just world is based on universal values, which are at the heart of both organisations – multilateralism is more necessary today than ever before.

This Council, together with the Third Committee of the General Assembly, is where the human rights situation in the world is debated and where the international community asks governments to promote, protect and respect human rights as universal, indivisible, interdependent and interrelated. We gather here to ensure a world where human rights and human dignity prevail. But we need to translate this noble ambition into actions that deliver sustainable progress. To echo UNSG Guterres, success must be measured by the yardstick of meaningful change in people’s lives. The EU will continue to promote human rights around the world, welcome progress where it has been achieved and denounce human rights violations and abuses wherever they occur. The EU remains committed to engaging in the spirit of partnership and constructive cooperation with partners from all regions to reach lasting solutions that advance the promotion and protection of human rights, including in relation to the global challenges of climate change and digital technologies.

We should redouble our efforts towards mainstreaming human rights throughout the UN system including in discussions at the UN Security Council. Special Procedures are an essential component of the UN human rights system, and the EU will continue to support their work and independence.

During the 43rd session, the European Union will present four initiatives, and support the negotiations of a number of others.  The EU will engage with all states on both thematic issues and country situations.  The EU will also engage with civil society on human rights issues across the Council’s agenda.

Given the continuing grave and systematic violations of human rights in the Democratic People’s Republic of Korea, the EU will once again present a strong resolution focusing on the dire human rights situation in the country. This resolution will send a clear message to the regime that it must immediately end human rights violations, rapidly improve both civil liberties and social-economic rights, and engage with the UN Human Rights System without delay.

Following last September’s joint EU-OIC resolution on the situation of Human Rights of Rohingya Muslims and other minorities in Myanmar, the EU will present a resolution on the human rights situation in Myanmar, including the decision on the renewal of the mandate of the Special Rapporteur. The resolution will underline the importance of the work of the Independent Investigative Mechanism for Myanmar, in particular with a view to ensure accountability, including by building on the work carried out by the International Fact-Finding Mission as reflected in  its reports.

During this session, the EU will once again table a resolution on Freedom of Religion or Belief. Intolerance, discrimination and violence based on religion or belief as well as violations to the right to freedom of religion or belief remain widespread across the world.  I call on all HRC members to support this resolution.

We will also pay particular attention to promoting the rights of child. The EU-GRULAC resolution on “realising the rights of the child through a healthy environment” will be tabled at the September HRC Session. In this session, the two groups will present a resolution renewing the mandate of the Special Rapporteur on Sale and Sexual Exploitation of Children.

It is critical that situations, such as in Syria or Libya, remain under the scrutiny of the Human Rights Council. We cannot ignore the widespread human rights violations and abuses that continue unabated in many places. We will therefore continue to engage with and support partners in their efforts to present resolutions that are substantial and reflect the tragic reality on the ground.

The EU reiterates its call upon all states to grant unconditional and unhindered access to the UN and UN mandate holders. In this vein, we urge China to allow meaningful access to Xinjiang for independent observers, including for the High Commissioner for Human Rights. We also call for access for international and regional human rights monitoring mechanisms to the Autonomous Republic of Crimea and the city of Sevastopol illegally annexed by the Russian Federation and areas of eastern Ukraine currently not under the control of the Government, to Myanmar, the occupied Palestinian territory, and to Yemen.

The EU continues to attach the utmost importance to the mandate and the independence of the OHCHR, and to its vital mandate in promoting respect, protection and fulfilment of human rights worldwide. We will also continue to promote strong civil society participation in the work of the HRC and to underline the need for a safe and enabling environment for human rights defenders. Reprisals against those who attend the HRC sessions or cooperate with the UN system are completely unacceptable.  The EU will work tirelessly to address all cases of reprisals, including by ensuring their perpetrators are held accountable.

The EU has further strengthened its toolbox for the promotion of human rights with the launch last week of a new database of EU Election Observation Missions. By bringing all our reports and recommendations together in one place, this facilitates operational follow-up and research by government authorities, civil society groups and donors on the different areas covered by Election Observation Missions such as civil society, media, participation of women and so on as by country and region.

Finally, members of the Human Rights Council have a special responsibility to uphold the highest standards in the promotion and protection of human rights and need to cooperate with special procedures and other mechanisms created by the Council, including Fact Finding Missions.

Posted in News
← Opening remarks at the International Conference in Doha on “Social Media: Challenges and Ways to Promote Freedoms and Protect Activists”Fighting COVID-19 is a battle for human rights →