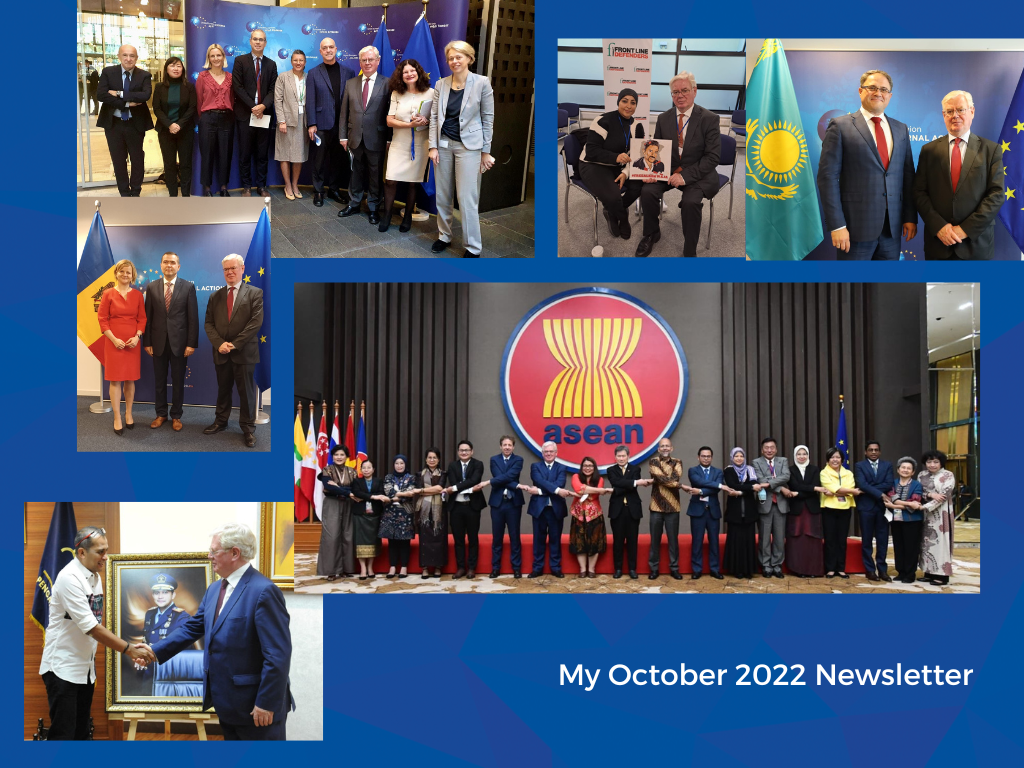 ASEAN/Indonesia  I recently co-chaired the 4th ASEAN-EU Policy Dialogue on Human Rights in Jakarta and met with the Indonesian government, in particular H.E. Edward Omar Sharif Hiariej Vice-Minister for Law and Human Rights, local human rights bodies and civil society (23-26 October). While Myanmar was in focus throughout my meetings, I also raised other major human rights crises in Xinjiang/China, Afghanistan and explained the EU’s actions to stem the Russian aggression against Ukraine while debunking the Russian narrative and disinformation.

Myanmar On 6 October, I exchanged with the Head of the UN Independent Investigative Mechanism for Myanmar (IIMM), Nicholas Koumjian, during his visit to Brussels. Together with colleagues from the EEAS, we discussed the IIMM’s work in collecting evidence of serious international crimes and violations of international law committed in Myanmar, the EU’s support to the Mechanism and international efforts to ensure accountability.

Taiwan I opened the 5th Taiwan-EU Human Rights Consultations held on 5 October online. The consultations confirmed a strong convergence of our priorities and human rights objectives. The past few years have seen a number of human rights initiatives in Taiwan such as the adoption of the National Human Rights Action Plan (2022-2024) or the establishment of the Executive Yuan’s department of Human Rights and Transitional Justice.

Afghanistan On 20 October, I met with over 170 civil society representatives of the Afghanistan Human Rights Coordination Mechanism (AHRCM) online, together with EU Special Envoy for Afghanistan, Tomas Niklasson. The mechanism protects and supports Afghan human rights defenders. EUSE Niklasson and I provided information and discussed EU efforts to promote human rights, in particular women’s and girls’ rights, protection of human rights defenders as well as support to accountability efforts.

Kazakhstan On 19 October I welcomed the Deputy Foreign Minister Roman Vassilenko to Brussels. He updated me on political reform and legislation, the forthcoming elections and the investigations into the events of last January.

Ukraine I continue to engage with Ukrainian authorities, international actors and third countries on the human rights and humanitarian consequences of the Russian aggression against Ukraine. On 21 October, I joined a virtual meeting with Andrii Yermak, Chief-of-Staff to President Zelenskyy on the situation of prisoners of war and civilians captured by the Russian army.

Belarus Over 1330 political prisoners are stuck behind bars. I continued to raise the profile of some known, others less well-known people whose stories need to be told. Join me.

Moldova On 19 October I opened the 13th EU-Moldova Human Rights Dialogue. Following the decision of the European Council to grant Moldova the EU candidate status I expect renewed efforts from the Moldovan authorities to strengthen the respect, protection and fulfilment of human rights.

Euro-Mediterranean: I delivered the keynote address to civil society leaders at the 25th anniversary conference of EuroMed Rights in which I recognised the historic struggles for human rights and called for greater accountability.

African Union I travelled to Geneva on 3 October to deliver opening remarks at the Human Rights Council 51 Side-event on “Realising the Right to Education Worldwide Through Digital Transformation”. I opened the event with African Union Commissioner for Political Affairs, Peace & Security, Bankole Adeoye. On the sidelines, I also met with UNICEF Director, Geert Cappelaere.

Venezuela On 21 October, I met with the prominent Venezuelan human rights NGOs PROVEA (Programa Venezolano de Educación-Acción en Derechos Humanos). I expressed my concerns about the continuous human rights violations, fundamental freedoms restrictions, as well as the erosion of the rule of law and persistent impunity in Venezuela.

Americas I travelled to Madrid in late September to speak on the role of the European Union in the promotion of Human Rights, peace and stability, at an event hosted by the Embassy of Ireland to mark Ireland’s 50 years as members of the EU. I met with Spain’s Secretary of State for Ibero-America and the Caribbean and for Spanish around the World, Juan Fernández Trigo in the lead up to the Spanish Presidency of the EU in the second half of 2023. I also met with Spain’s Human Rights Ambassador Guillermo López McLellan.

Separately, I met with Juanita Goebertus on 10 October, in her new role as Human Rights Watch Director for the Americas. We discussed the human rights situation in Latin America, and in particular in El Salvador, Brazil, Mexico and Cuba.

Death Penalty: 10 October is the European and World Day against the Death Penalty. I marked this date with a video message focusing on the few countries that continue to use this abhorrent practice.

“No country should have the license to kill its own people.”

Human Rights Defenders It was an honour to meet 100 human rights defenders from 100 different countries at the 2022 Dublin Platform for Human Rights Defenders organised by Frontline Defenders. I heard many stories of courage, including from Maryam Alkhawaja whose father has been in prison in Bahrain for over 11 years. I joined the call for his release.

Digital Sphere and Human Rights On 26 October, I spoke on the importance of standing up for human rights both offline and online at the World Ethical Data Forum. The EU is working towards harnessing opportunities and addressing challenges of new technologies. Through human-centric EU legislation as well as through our foreign policy actions (Watch the video address here).

Sign up to the monthly newsletter with an email

Upcoming in November (subject to changes)

Sign up to the monthly newsletter with an email