A year has passed since the military snatched democracy out of the hands of people in Myanmar. Since the military coup, which overthrew the civilian government and disbanded the democratically elected Parliament, there has been a continuing escalation of violence targeting journalists, human rights defenders, Rohingya and other ethnic and religious minorities, women and children. More than 1500 people have been killed, over 8,600 arbitrarily detained and 80 people sentenced to death. There are credible reports of the use of torture and sexual and gender-based violence.

I visited Myanmar, in June 2019, where I had the honour to co-chair the Fifth European Union-Myanmar Human Rights Dialogue. Along with my counterpart, U Kyaw Tin, Union Minister for International Cooperation of the Republic of the Union of Myanmar we discussed accountability for human rights violations, the situation in Rakhine, Kachin and Shan States, including humanitarian access, fundamental rights and freedoms, the needs of displaced persons, economic and social rights, migration and human rights cooperation in multilateral fora. 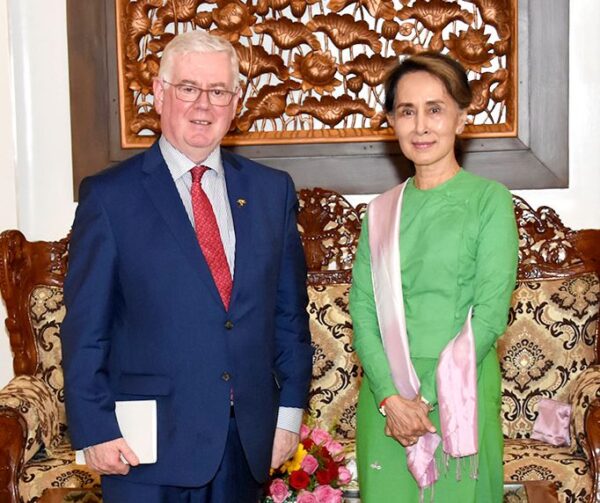 The EU reaffirmed its continuous strong support for Myanmar’s democratic transition, peace and national reconciliation process and inclusive socio-economic development. I met with many leaders including State Counsellor Daw Aung San Suu Kyi. Myanmar undertook to ratify international treaties to protect civil and political rights and introduce an upcoming Child Rights Law in line with international human rights standards. The dialogue gave us a path forward for future cooperation. One year later, I chaired the Sixth Human Rights Dialogue shortly before the parliamentary elections. It took place online due to the COVID-19 pandemic.

The military coup in February last year dealt a heavy blow to prospects for a democratic transition in Myanmar. The military has marked this anniversary by extending the state of emergency for another six months, thereby further tightening the noose. In fact, Myanmar risks turning into a protracted conflict and a humanitarian crisis with a large part of the population experiencing poverty, food shortages, displacement, and violence.

Our engagement with Myanmar therefore becomes doubly important. Following the coup, I met with civil society representatives and opposition leaders, including from the National Unity Government. I have consistently highlighted the important work of human rights defenders and called for the release of all political prisoners. While the EU has frozen all activities with state bodies, it has continued providing aid through civil society and to the general population, and has significantly stepped up its humanitarian aid to vulnerable individuals on the ground.

In 2021, the European Union allocated €24.5 million in humanitarian aid funding to address the immediate needs of the most vulnerable, including displaced and conflict-affected communities.

The coup has further exacerbated the plight of the Rohingya, one of Myanmar’s many ethnic minorities. They continue to flee violence and discrimination, often risking their lives in a perilous escape at sea. There are over 400,000 newly displaced people since the military take-over. This is in addition to almost one million Myanmar refugees in neighbouring countries.

I visited refugee camps in Cox’s Bazar two years ago. I spoke with Rohingya refugees, exhausted by their deathly journeys. I worry for the fate of the children, who make up half of all refugees in Cox’s Bazar. They will grow up knowing that they are not welcome back home.

In 2020, we co-hosted a donors conference Sustaining Support for the Rohingya Refugee Response, which helped raised 597 million U.S. dollars for Rohingya refugees. We will continue to provide humanitarian assistance to safeguard the future of the children and families living in exile.

It is our duty to ensure Myanmar does not turn into a protracted crisis and returns to its path towards respect for human rights and the rule of law.

At the United Nations, we have been the driving force calling for the improvement of human rights situation in Myanmar and for ensuring accountability. For many years, we have presented at the Human Rights Council a resolution on the situation in the country to maintain the international attention.

The work of the UN Independent Investigative Mechanism for Myanmar launched by one such resolution is critical. They have now gathered over 1.4 million pieces of evidence of the most serious international crimes and are preparing files for criminal prosecution. Their efforts can facilitate prosecutions against potential crimes against humanity or war crimes.

On Tuesday morning, people in Myanmar marked the anniversary of the coup with a silent strike, despite the military threats of arrest. The roads were emptied, shops were shut and activity in all major cities came to a standstill. This silence speaks volumes of the courage and determination of the people.

The European Union will continue to stand with all peoples of Myanmar in their quest for dignity and human rights.

Related: Read the Declaration by the High Representative on behalf of the European Union on the anniversary of the coup in Myanmar