‘Russia’s attack on Ukraine and its human rights consequences’

Speech by the EUSR for Human Rights, Eamon Gilmore

It is an honour to speak here together with you, First Deputy Foreign Minister Emine Dzhaparova. Your Excellency, the EU salutes your courage and that of the Ukrainian people, and we stand in solidarity, as you all fiercely resist this brutal and savage war launched by President Putin. 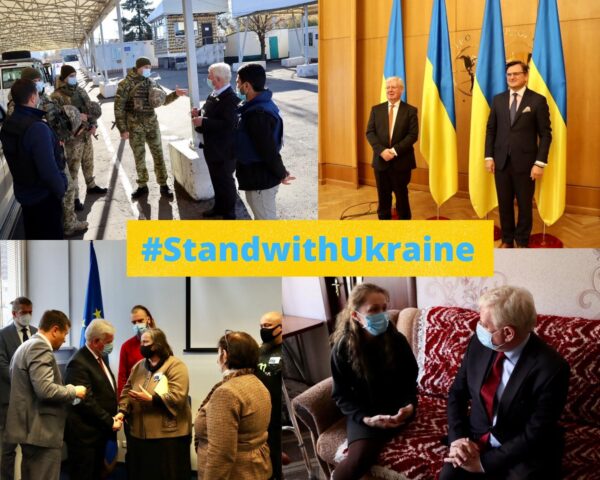 Just four months ago, I was visiting a free, democratic and peaceful Ukraine where I was briefed about, and discussed with you the already dire human rights and humanitarian situation in the illegally annexed Crimean peninsula by Russia and the temporarily non-government controlled areas in eastern Ukraine. But now we are addressing the safety and the human rights of all Ukrainians as a result of Russia’s military aggression and a full scale invasion of the country.

More than a half a million people have already fled Ukraine to neighbouring countries; those who have stayed on face forced internal displacement, attacks on civilian objects, including kindergartens, schools, hospitals and residential areas across the country. In her speech yesterday, High Commissioner Bachelet reported that most of the civilian deaths recorded by her office, had been caused by explosive weapons with a wide impact area. The European Union’s HRVP Josep Borrell has this morning condemned the shelling of civilian infrastructure in Kharkiv, which violates the laws of war.

Reports and allegations of violations are mounting. It is therefore imperative for the Human Rights Council to address the humanitarian and human rights ramifications of the Russian aggression. Council Members have already shown strong support for holding of an Urgent Debate, in the vote on Monday morning. Now we must hold Russia accountable for its actions.

The gravity of the ongoing invasion by Russia fully justifies a call for the establishment of a commission of inquiry. The commission should look into all human rights violations and abuses, and violations of international humanitarian law, including in eastern Ukraine and in the illegally annexed Crimean peninsula.

The EU welcomes the decision by the Prosecutor of the International Criminal Court to open an investigation. There must be accountability for those responsible, for the deaths of and injuries to children, the attacks on civilian objects, and for all the violations of IHL.

Russia’s aggression will have lasting consequences for the protection and promotion of human rights in Ukraine. The EU will continue to stand by Ukraine, support its democratically elected institutions and representatives and its people through political, financial, humanitarian and logistical assistance.

We salute too those courageous citizens of Russia who have already raised their voices in protest against Putin’s war on Ukraine. Their human rights are also being trampled upon.

We appeal to all the UN Members to defend the principles and values of this Human Rights Council. The Council has a critical role to play alongside the UN Security Council and the General Assembly. Let us be what the great Ukrainian poet Taras Shevchenko might have wished: in this hour of need Ukraine’s “great new family, the family of the free”.