Exchanges of Views with the EU Special Representative for Human Rights 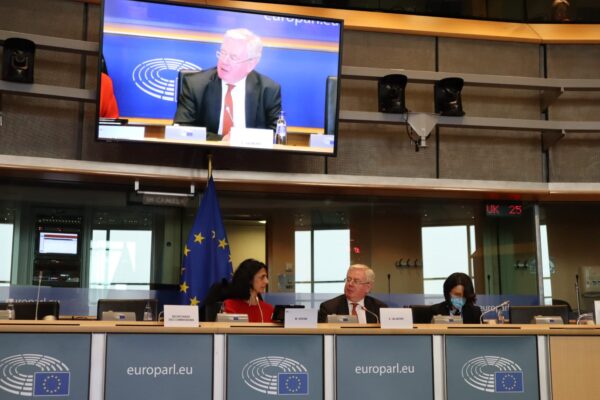 Thank you Madame Chairperson, Members [of the European Parliament]

It is great to be back with you again, in person. It has been a long time.

At about this time yesterday, I was being briefed by the representatives of the International Committee of the Red Cross about the dire situation on the ground in Ukraine. About the apocalypse in Mariupol, where our fellow human beings are struggling to survive – without food, with no water, no electricity, no heat, no medicines – as war and death rained down upon them.

Five months ago, I was visiting a free, democratic, and relatively peaceful Ukraine. I stood at the contact line with the non-government controlled eastern part. I talked with OSCE monitors, with victims from the earlier conflict, with journalists who told me of the torture of detainees in Crimea and I spoke with Ministers, Parliamentarians, civil society and human rights defenders – and none of us could have imagined then, the hell that is now being inflicted on the Ukrainian people by the full-scale invasion of their country by Russia.

Since February 24th, Ukraine has of course been at the top of my agenda. I have participated in the diplomatic outreach and support of the UN General Assembly and Human Rights Council resolutions. I spoke together with the Deputy Foreign Minister of Ukraine to an event at the Human Rights Council rallying support for the establishment of a Commission of Inquiry. Last Friday, I spoke with Lyudmyla Denisova, Ukraine’s courageous Commissioner for Human Rights, and I understand that you will meet her later this morning. Later today I will travel to Poland, for meetings and more so, and on Friday I will visit the border with Ukraine to see for myself the suffering of refugees, the generosity of hosts, and the challenges we collectively face.

Ukraine is the latest, in what has been an avalanche of crises over the past year or more, all involving massive abuses of human rights, and in cases of conflict, massive violations of international humanitarian law.

With the unset of each new crisis, the international community struggles to maintain interest and sometimes action on last month’s crisis or last year’s crisis. And while today, in the European Union, our attention is rightly focussed on Ukraine, we must not forget the political prisoners in Belarus; supressed civil society and media workers in Russia; the women and girls in Afghanistan; the Rohingya people from Myanmar; or our African brothers and sisters suffering from the war in Ethiopia. And there are many others. No continent on earth is free from human rights abuse and violation. In many cases they are interlinked. I see it as part of my role to keep alive the attention to the human rights agenda in many countries, after the cameras have moved on to the next crisis.

On Belarus, I have been meeting with representatives of civil society and of the Belarus opposition. I have been discussing the situation in Belarus with OSCE-ODIHR, the Council of Europe, and the UN Special Rapporteur as well as bilaterally with several countries. I am giving particular attention to the plight of political prisoners of whom there are now more than 1000, and I have launched a social media campaign to focus attention on the case of some of the lesser known individuals. I hope to meet representatives of the Belarus diaspora when I am in Warsaw tomorrow.

The Taliban takeover of Afghanistan in August has resulted in the biggest setback anywhere so far this century, for the rights of women and girls. Since just after the Taliban takeover I have been in regular contact with Shaharzad Akbar, the Chairperson of the Afghan Independent Human Rights Commission, and indeed I met with her here in Brussels recently when she attended for some of the events in the European Parliament. I have discussed Afghanistan at senior levels of government during my country visits in its neighbourhood, including Kazakhstan, Kyrgyzstan and Pakistan, where I also had the opportunity to meet Afghan refugees in Rawalpindi. I have also been working closely with the EU Special Envoy for Afghanistan, Tomas Niklasson, and our Ambassador for Gender and Diversity, Stella Ronner, to ensure that in all of future engagements on Afghanistan the issue of human rights and especially of women and girls are kept to the fore.

On Myanmar, I have met with representatives of the National Unity Government; I spoke at a high-level event at the UN General Assembly in September on the Rohingya refugees; and I am currently considering a return visit to Cox’s Bazar, which I visited in May 2019, and to that end, I recently met with the Ambassador of Bangladesh.

On Ethiopia, I have had several meetings with government ministers (Ministers of Finance and the Minister of Women, Children and Youth) and with the Chairperson of the Ethiopian Human Rights Commission. I am continuing to press for the implementation of the recommendations of the ongoing investigation of the OHCHR and the Ethiopian Commission on Human Rights. I worked closely with the EUSR for the Horn of Africa, Annette Weber, on Ethiopia and I am currently planning a visit to the country in May.

Ethiopia, Myanmar, Afghanistan and Belarus all featured prominently in the first ever EU-OHCHR Strategic Dialogue on human rights, which I co-chaired in October with [UN] High Commissioner for Human Rights, Michelle Bachelet. We plan to have the next meeting of the Strategic Dialogue in June and in Geneva.

The Strategic Dialogue with the Office of the High Commissioner also included discussions on economic, social and cultural rights and on business and human rights. Both of these topics were also prominent in the very important Human Rights Dialogue which we held with the African Union. I attach particular importance to our dialogues with the African Union and to our engagement with the African Commission on Human and Peoples’ Rights, who have honoured me by inviting me to participate in several of their sessions and special events, including the 40th Anniversary of the African Charter.

In Africa, I plan to visit Uganda in early April and Zimbabwe at a later date. The Human Rights Dialogue with South Africa scheduled for January was postponed due to Covid and we are now seeking a new date. I intend to visit Egypt before Easter. This will be the first visit of an EUSR to Egypt since my predecessor visited the country in 2017. To that end, I had a meeting with the Ambassador of Egypt and I recently met with the Chair and representative of the Egypt Human Rights Commission and I am also meeting with civil society.

Staying in the MENA region, we have had our first Human Rights Dialogue with Saudi Arabia last September and I hope that the next meeting of that dialogue can take place in Riyadh later this year. I want to take this opportunity to express once again, the European Union’s total opposition to capital punishment in all circumstances and in particular the 81 executions carried out by Saudi Arabia last weekend.

I recently met with the Chair of the Human Rights Commission of Qatar and discussed our hopes that progress made in that country will be sustained and built upon after the World Cup.

I have spoken publicly about Israel’s decision to list six Palestinian NGOs [as terrorist organisations] and also the issue of administrative detention which led to hunger strike by Palestinian detainees. I am working closely with the EUSR for the Middle East Peace Process and I hope to be able to visit Israel and Palestine later this year.

I visited Kazakhstan in October; and since the events of January, I have met on a number of occasions with Kazakh authorities, including with Foreign Minister and Deputy Prime Minister Tileuberdi and Presidential Advisor Kazykhan, to whom I have conveyed our expectation that the government investigations into these events will be credible and transparent. I am told that both of those investigations are due shortly.

I recently visited Pakistan, mainly for discussions relating to GSP+, which I know is a topic that is also on your agenda later this year. I gave particular attention to issues relating to pay and conditions of the mainly female workforce in the textile industry. I have an invitation to attend the Raisina Dialogue in India in late April, which I am accepting and hope to build a bilateral programme around that.

In the Americas, I will travel to the United States next week for the EU-US Human Rights Consultations in Washington. I was in Brazil in November for the Human Rights Dialogue and to visit and meet with human rights defenders in the Amazon. I am paying particular attention to the human rights situation in Nicaragua and in Cuba. I was in Colombia for the 5th Anniversary of the Peace Agreement in November and I am currently trying to set a date with Mexico for the next Human Rights Dialogue.

Thank you again for the opportunity.