Remarks by the European Union Special Representative for Human Rights 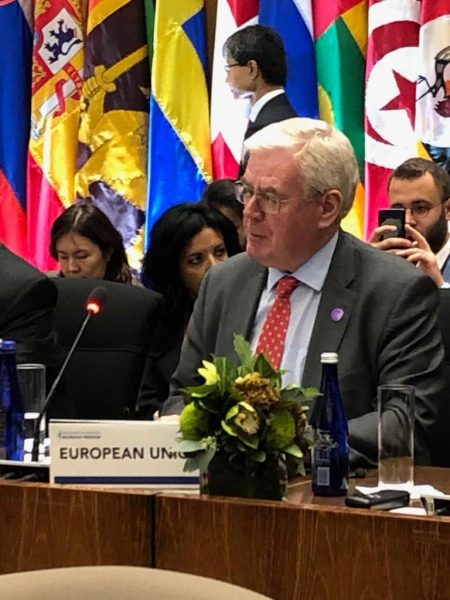 I wish to thank Vice-President Pence and Secretary Pompeo, as well as Ambassador at Large Brownback, for the honour to speak here, and for organising today’s Ministerial. I am here representing the HRVP of the EU, Federica Mogherini, who has asked to express the EU’s support for this important event.

Last year, the first Ministerial on Religious Freedom coincided with the seventieth anniversary of the signing of the Universal Declaration of Human Rights. The Universal Declaration, as we all know, and we have all committed to, includes the critical right to freedom of thought, conscience and religion (Article 18). Unfortunately, since this initiative was launched last year, the world has witnessed more and more violations of fundamental principles, many of which have been highlighted over the last two days by faith actors, victims of religious persecution and human rights defenders. Extremist attacks in Christchurch, Pittsburgh and Sri Lanka, and the terrible consequence of the spreading of hate speech and hate crime against people belonging to religious groups.

The right to religious freedom is enshrined in article 10 of the EU charter of fundamental rights. Article 9 of the European Convention on Human Rights commits to freedom of thought, conscience and religion. The European Union has a strong legislative framework that ensures that freedom of thought, conscience, religion and belief is underpinned by domestic legislation in all our 28 Member States. We have effective laws against discrimination, racism, xenophobia and incitement to violence and hatred, including on religious grounds. The EU has a Fundamental Rights Agency, who closely monitors how persons belonging to religious groups, in particular Jews and Muslims, face discrimination, hate speech and hate crime within the EU and together with the European Commission ensure that these issues are addressed at the national level.

Our message is always clear and consistent, in all parts of the world and with all partners no matter their wealth or perceived geopolitical importance. Government officials and political leaders have a duty to guarantee freedom of religion and belief, and they may not use “national security”, counter-terrorism, or cultural arguments to trade-off or undermine it.

We also stress the need to avoid the polarisation of these rights, or the prioritisation of same rights over others. Freedom of religion and belief should be part of a broad effort to promote and adhere to non-discrimination priorities and should not be separated from the protection of all other human rights.

Beyond local and regional situations, the work for human rights is and must be a global effort. The EU believes that the United Nations is the principal forum to advance and protect human rights, including freedom of religion and belief.

The Human Rights Council in Geneva and the UNGA Third Committee in New York are pivotal in our collective efforts to promote freedom of religion and belief. Through those fora we have supported countries that wish to better guarantee their citizens’ freedoms, and highlighted egregious violations in need of urgent attention

For many years the European Union has led a strong resolution specifically on freedom of religion and belief in both the Human Rights Council and UNGA Third Committee. We have worked closely with the Organization of Islamic Cooperation on their “twin” resolution on ‘Combating Intolerance’ to ensure complementarity of both resolutions.

Last March, the EU led the freedom of religion and belief resolution at the Human Rights Council. The resolution renewed the mandate of the UN Special Rapporteur on Freedom of Religion and Belief for a further 3 years. We consider fundamental the work of the UN Special Procedures to monitor human rights violations around the world as well as to assess and advise governments on how to improve protections including through legislation.

The establishment in 2019 of an International Day against religious persecution, proposed by Poland, represents a good opportunity for all of us to publicly show our commitment to tackling violence against believers and non-believers. In addition, we welcome that the Netherlands will host the next round of the Istanbul process.

We all have different cultures and belief systems. But we also all share the same humanity. We believe that all human beings are endowed with certain universal rights. And we believe that human rights must be the same for everyone, regardless of how we worship, where we worship, or indeed if we worship at all.