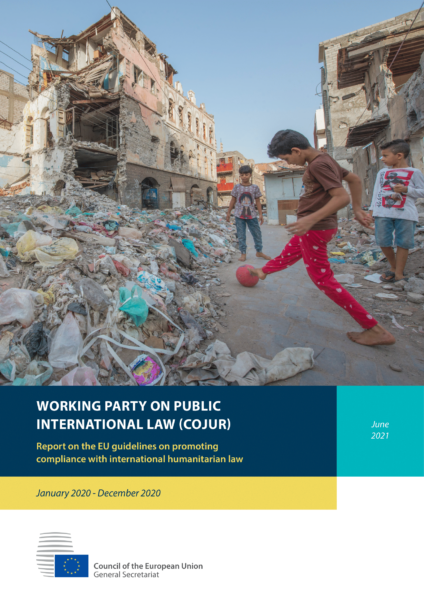 Laying down the law in times of armed conflict

Today I spoke at the first public launch of the Annual Report on the EU guidelines on promoting compliance with International Humanitarian Law. My thanks to the Slovenian and Portuguese presidencies for co-hosting this event. “International Humanitarian Law” can sound bureaucratic, dry and legalistic, but respect for IHL is often the difference between life and death for the world’s most vulnerable populations – an assurance that humanitarian workers will be able to deliver life-saving assistance to the most dangerous places.

During armed conflict, the international community turns to the set of rules that form IHL to ensure rapid and unimpeded passage of humanitarian relief; to guarantee freedom of movement for humanitarian workers; and to protect civilians, sick and wounded and other vulnerable people by laying out the duties of States and non-State armed groups. Ultimately, it seeks to limit the effects of armed conflict in civilian populations.

Although these rules and principles are universally accepted, and parties to armed conflicts are bound to them by treaties, violations of IHL are quite common. Attacks on civilian populations, sexual violence, the recruitment and use of children, attacks to humanitarian workers or against hospitals or vehicles belonging to relief organizations are all too frequent, preventing millions of people from receiving indispensable assistance. As one of the largest humanitarian donors, the EU is firmly committed to promoting global respect for IHL.

To address these violations, the EU approved in 2005 (and updated them in 2009) EU Guidelines on Promoting Compliance with International Humanitarian Law, which contain an invaluable set of tools that the EU and its Member States can use to support compliance with IHL by third States. These tools range from political dialogue and public statements, to sanctions, bans on arms sales and prosecution of individuals responsible of war crimes by national courts or the International Criminal Court (ICC) when relevant. The EU is the only regional organisation that has adopted guidelines on promoting compliance with IHL. This is the fourth Annual Report of the EU’s work on IHL, and the first time that we are launching it publically.

Promoting respect and compliance with IHL is a fundamental element of my mandate, and as such, I often engage with relevant authorities during ongoing armed conflicts, complementing the efforts of other EU Institutions, including the EEAS and DG ECHO. In the last months, I have engaged with Afghanistan, Yemen, Ethiopia and the Sahel, to raise concerns about treatment of civilians, the lack of humanitarian access, sexual violence, the use of children in armed conflicts or the lack of accountability among other issues. I have also raised issues related to IHL in the context of human rights dialogues with Colombia, Myanmar and Ukraine, including the protection of civilians, medical care, humanitarian access and accountability for violations of IHL as an important part of combatting impunity and building peace.

In the fight against impunity for serious violations of international humanitarian law, international criminal justice institutions, such as the ICC, play a key role. The EU continues to support the ICC when it is targeted by attacks and disinformation campaigns, which are aimed at eroding its legitimacy. Our constant messages of support and information campaigns on the Court’s activities remain vital.

I have also frequently engaged with the UN and other international bodies to ensure that there is accountability for the victims of IHL violations. A victims-centred approach on IHL and international criminal justice will certainly raise awareness on the dire consequences of armed conflicts and the breaches that IHL have on humanity as well as on the importance of accountability. This approach also sends a clear message to the perpetrators of these heinous crimes: there will be no impunity.